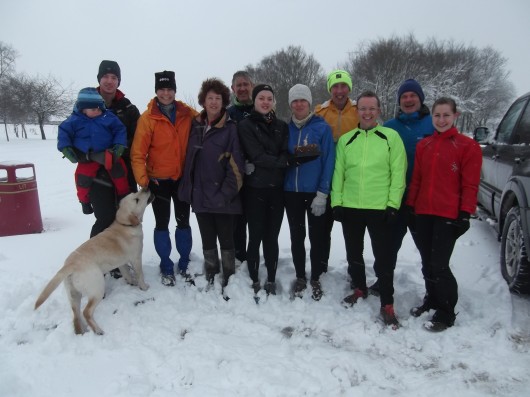 We had a great adventure run to celebrate our 3rd anniversary. The decision to run on the road (it was thought this may be easier) went horribly wrong when we ended up surfing 5ft snow drifts on the way up to Ashover Rock. It is the only time the footpaths that are notoriously muddy even in drought conditions became a favourable alternative. When a 4×4 is found abandoned in the road it must be bad. On the upside, two cans of Carling were found unopened (and nicely chilled) which seemed all a bit random but were put to good use by the runners!!

The run back from Ashover Rock was fast (due to it being largely downhill) and driven by the thoughts of cake. Cadbury surpassed themselves – perhaps we should ask for sponsorship at some stage!

Previous Image
Next Image
Copyright © 2021 Wingerworth Wobblers RC. Proudly powered by WordPress. BoldR design by Iceable Themes.
This website uses cookies to improve your experience. We'll assume you're ok with this, but you can opt-out if you wish.Accept Read More
Privacy & Cookies Policy

This website uses cookies to improve your experience while you navigate through the website. Out of these, the cookies that are categorized as necessary are stored on your browser as they are essential for the working of basic functionalities of the website. We also use third-party cookies that help us analyze and understand how you use this website. These cookies will be stored in your browser only with your consent. You also have the option to opt-out of these cookies. But opting out of some of these cookies may affect your browsing experience.
Necessary Always Enabled

Any cookies that may not be particularly necessary for the website to function and is used specifically to collect user personal data via analytics, ads, other embedded contents are termed as non-necessary cookies. It is mandatory to procure user consent prior to running these cookies on your website.